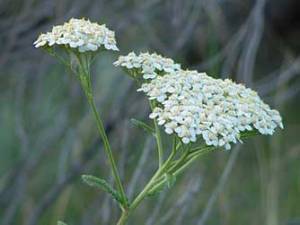 This article was conceived in the spring, and got lost over the summer in the “to publish” folder, so you will read about yarrow at a time of year when you can’t easily go pick it.
Hopefully it will give you something to look forward to. Come spring , the feathery yarrow sprouts will be coming up out of the ground, and the pink, yellow and white flowers will follow in summer.
In my garden, I have many herbs I planted from seed, a few gifted, and a few bought plants. Oregano, rosemary, lavender, dill, fennel, sweetgrass, white sage, coriander have all graced my yard over the years. Most are still there. Of all of them, the only one I regretted buying was yarrow. Not because I don’t like it or find it useful, but because I had to laugh out loud at myself when I brought it home to plant and found it growing wild in the yard already. Yarrow is found all over Seattle in white, pink, and yellow flowering varieties; some in gardens, some volunteering. It is one of the herbs which has a rich medicinal use history in Native American and European herbalism . In addition, it is used in the Western magical traditions and is immortalized in British poetry and folklore.

Gerard tells us that yarrow is the same plant with which Achilles staunched the bleeding wounds of his soldiers. Others say that it was discovered by Achilles, Chiron’s disciple.

It was called Herba Militaris, the military herb, by the ancients. Hence the genus name, Achilles. The specific name, Millefolium, is derived from the many segments of its foliage, thousand leafed literally. It is also called milfoil, old man’s pepper, soldier’s woundwort, Knight’s Milfoil, thousand weed, staunchweed, and Devil’s nettle.(Grieves)

Yarrow grows everywhere, in the grass, at the base of trees, in meadows, by the roadside. It’s stalks are used in throwing the I Ching in China. It flowers from June to December, according to Grieves, although I’ve not seen a bloom past September. The stems are hairy, it has many fine leaves and a cluster of flowers(see pic). It spreads by root and seed.

Yarrow was much esteemed as a vulnerary, for stopping bleeding. “The Highlanders still make an ointment from it, which they apply to wounds, and Milfoil tea is held in much repute in the Orkney’s for dispelling melancholy”(Grieves, Modern Herbal) It has been called Nosebleed for its property of staunching nosebleeds, although it is also attributed with the ability to cause a nosebleed. “…there is a curious mode of divination with its serrated leaf, with which the inside of the nose is tickled while the following lines are spoken….’Yarroway, Yarroway, bear a white blow, If my love love me, my nose will bleed now”(Grieves). There must be an easier way!

Yarrow was used by Native Americans for digestive troubles and headaches, as well as for staunching wounds. It was employed as snuff in Europe, hence Old Man’s Pepper.

In the 17th century it was used in salads. Yarrow tea is a good remedy for severe colds; a decoction for kidney disorders. The bruised herb is used in Norway for rheumatism, applied topically.

In Western magical herb traditions, Yarrow is attributed to Venus, and used in love incenses and spells. An ounce of Yarrow sewed up in flannel and placed under the pillow before going to bed, having repeated the following words, brought a vision of the future husband or wife:

“Thou pretty herb of Venus’ tree,

Thy true name it is Yarrow;

Now who my bosom friend must be,

Yarrow is attributed to Venus in other sources as well, and is used in her oils and incenses. It grows wild around the Pacific Northwest and can be bought if you must. Pink, yellow and white are common. The flowers and leaves can be easily gathered without killing the plant, so there is always more next year. It is near impossible to kill if you are looking to learn to garden and haven’t yet developed a green thumb.
I will leave you with a poem from Carmina Gaedelica, that treasure trove of Celtic folkloric poetry assembled by Alexander Carmichael in the 1880s.

I will pluck the yarrow fair,

That more benign shall be my face,

That more warm shall be my lips,

That more chaste shall be my speech,

Be my speech the beams of the sun,

Be my lips the sap of the strawberry.

May I be an isle in the sea,

May I be a hill on the shore,

May I be a star in the waning of the moon,

May I be a staff to the weak,

Wound can I every man,

Wound can no man me.

Freedom to Visualize the Postive.

Back when I was trying to interact with crazy people who wanted everyone to be crazy with them, I did not have the time or energy to visualize positive things. Taking the really toxic, negative, destructive, dishonest people out of my life has allowed me to attract different energies. I am surrounded by so many brilliant, kind people that I don’t have enough time to get to know them all. Avenues of learning, worship, love and friendship continue to open up in the most unexpected ways. I am blessed on any given day with a feeling of aliveness and wonder. And all because I quit trying to heal people who would rather stay sick. It is a judgement call, and I get to make it. For Samhain I release any part of me that still feels a need to argue with gaslighters, negotiate with domestic terrorists(meaning the ones who terrorize me) and heal those truly intractable by choice. For Samhain, I welcome in love and health and balance and friendship and abundance and beauty. Walk in peace, walk in beauty, walk in kindness, walk in peace. Blessed be./